Four Men, a driver and dog 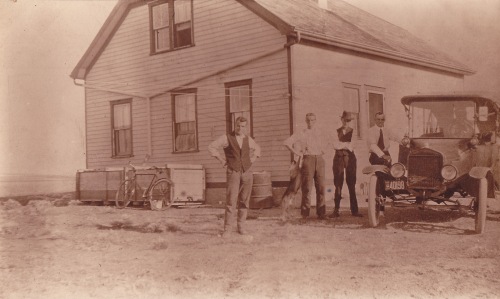 Another postcard found and purchased online, no information on the back of the card. The photograph is posed but not in a formal way and the dog is doing it’s own thing. The shadows of the car wheels, bicycle, house and the mysterious driver all add to the image. It looked American to me when I first saw it but I’m not sure. The number plate might provide clues to the location, there are smaller numbers to the left of the main number plate (they looked like 1908 to me under a loop) and a symbol or crest of some kind. It isn’t an early British number plate as they started with letters followed by numbers. US plates vary from state to state but this could be American as they often had symbols to identify the state.